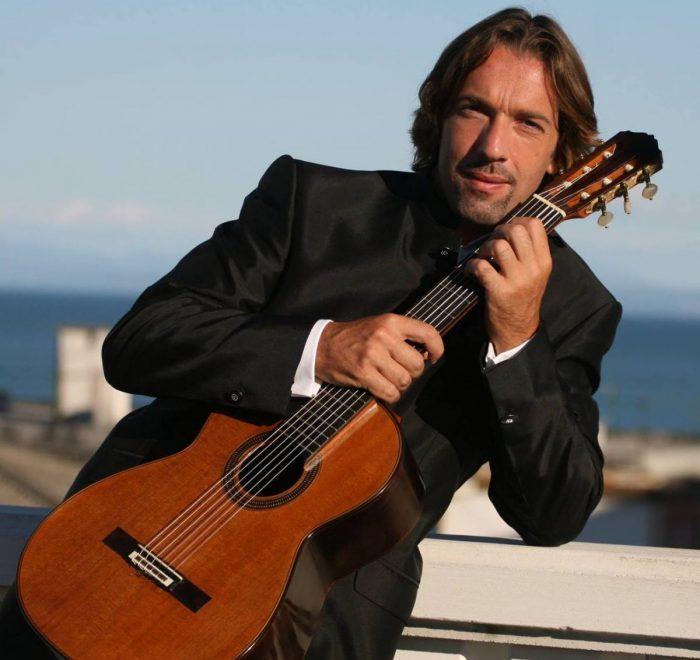 Born in 1977 in Lignano Sabbiadoro (Udine), he began studying guitar at the age of 12 under the guidance of Stefano Viola at the “Jacopo Tomadini” Conservatory in Udine where he graduated in 1999 with Guido Fichtner, achieving full marks and honours.

At the same time he attended lessons at the “Francisco Tàrrega” Academy in Pordenone, perfecting himself with Stefano Viola and Paolo Pegoraro; it is precisely in this school that he carries out a path of research and technical and stylistic-interpretative deepening which still continues and which has led him to be considered and known internationally.

He has attended masterclasses with important concert performers and teachers such as David Russell, Manuel Barrueco, Stefano Grondona, Angelo Gilardino and Alberto Ponce who awarded him the «Subinates» prize, as the best student in a masterclass held by the Maestro in Switzerland. In 2001 he won a scholarship to study at the Lovran Academy of Music (Croatia) with Carlo Marchione.

Adriano made the juries of important national and international competitions agree, winning 12 first prizes. Among these we mention: “Benvenire Terzi” of Bergamo, “Nicola Fago” of Taranto, “Castelnuovo Tedesco” of Parma, Ragusa (absolute winner of all instrumental categories), Isernia. Winning the international competition “Julian Arcas” in Almeria (Spain) gave him the opportunity to record his first solo CD for Radio Nacional de Espana.

In 2003, as part of the International Conference of Alessandria, he received the prestigious award “La chitara d’oro” as the best young concert artist of the year at an international level.

In 2004 he was the winner of the prestigious “Michele Pittaluga” competition, city of Alessandria award, thanks to which he performed a tour of 40 concerts all over the world, among which the performance of the “Concierto de Aranjuez” with the Philharmonic of St.Pietroburgo.

David Russell, in the context of an interview in an important specialized magazine, cited him among the best young concert players of the moment.

He has great interest in gypsy-Andalusian singing (cante jondo), the highest form of expression of flamenco, from which he finds a strong source of inspiration.

He plays a guitar by German luthier Matthias Dammann.

He currently teaches at the Universität für Musik und darstellende Kunst in Vienna.